Natasha, Pierre, And The Great Comet Of 1812 Musical Lyrics 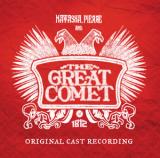 Natasha, Pierre, And The Great Comet Of 1812 Lyrics

The script was an adaptation of L. Tolstoy’s novel. The libretto & music was written by D. Malloy. The premiere of the spectacular was in October 2012 on the stage of Ars Nova. In May 2013 the histrionics moved to the casino, located in the Meatpacking District. In September 2013, the play moved from there to the Theater District scene. Directed by R. Chavkin, the musical was presented in the form of a club dinner, decorated in Russian style, where the action was happening around the audience. Choreographer – S. Pinkelton. The theatrical involved: P. Soo, D. Malloy, L. Steele, B. Ashford, G. McLean, A. Gray, B. DeLong, N. Choksi, G. Bell & P. Pinto among others.

The team that created the original version of the musical, refined performance to display it in the American Repertory Theatre. Production took place during December 2015 – January 2016. Broadway premiere is planned on November 2016. The histrionics will be held at the Imperial Theatre stage. Director will be again R. Chavkin. The show will involve: J. Groban, D. Benton, B. Ashford, L. Steele, G. McLean, N. Belton, A. Gray, G. Bell, N. Choksi & P. Pinto. The cast may be a subject to change until the opening night.