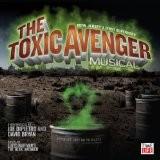 The action of this musical begins in the state of New Jersey. An earth scientist is in the center of the story. He claims that the state must be cleaned up. The main character goes to the library, where he meets the prettiest but blind girl. He tells her about the danger and about toxics, which have been released. The man wants to search for people, responsible for this, and destroy their plans. The woman first gets attracted by heroism, but then, after touching his face, she understands that feels nothing towards him. In the city records, the main hero finds something shocking and important.

The town mayor wishes to become a New Jersey governor. Her dream is ruined, when the scientist comes and gives evidence that she is the one, responsible for the town being surrounded by toxic waste. She promises to change current situation. The man is appointed her deputy. After he goes away, she orders to get rid of him. Her servants find him and leave to die in a drum of waste. Then they meet the woman and she faints, because of getting frightened. Right at that moment, an enormous mutant appears. Seeing, what has happened, he tries to kill the servants. He also helps the woman, bringing her home. The mutant tells her the truth about himself. She wants to touch him again, but he refuses. When he runs away, she calls girlfriends to tell everyone about such hero.

The mutant comes home. His mother is disappointed, and he gets very upset. The former man goes to HMO doctor, who sends him to a mad scientist. The latest reports, only bleach is able to get rid of mutant. He comes to the girl and says that he is on special mission to clean the whole city from toxics. He also confesses he has never been with a girl in the intimate plan. The woman gets attracted by such virginity and expressed feelings.

Unloading of waste is happening in the docks. The mayor supervises it. The mutant comes to spoil her plans. He also uncovers his real personality – the scientist she has tried to kill. The mayor wants to murder him, but nobody supports her. All the people in the town watch at this mutant as at a hero. Using sex appeal, the mayor persuades the mad scientist to tell, how to destroy the mutant. Then she tries to find him by addressing to his mother. The pretty librarian cannot seduce the main character and gets upset. He also tells her, he has to leave the town. Before quitting, he uncovers his real personality, but she still promises to love him. The heroine touches his face, and everything changes. She wants to see other people. As his heart is broken, the mutant kills one of the citizens. He cannot rule his anger. In library, his mother and the nice girl come to the understanding that all people are freaks, and the mutant isn't so much different from others.

The mayor decides to use bleach. The girl comes to save her beloved. The head of the town gets shot, but it is too late. The mother finds a way to bring him back to life. At the end, the main hero is selected to be a new mayor. The librarian marries him, and they have a wonderful blind green child.
Last Update:July, 18th 2016