Story of My Life, The review 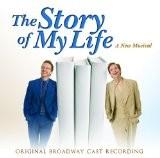 Story of My Life, The review

Story of My Life, The Review - Broadway musical

The authors of this work began working on Manhattan since 2001. Canadians participated in theater festivals, and attracted a lot of attention to their works. Once upon a time, their songs heard M. Bush of the Manhattan Theater Club. He was impregnated with an idea to try to make songs for this musical. When a Canadian company offered to produce works written by N. Bartram and B. Hill, director joined to their creation. The first show was in Toronto. Critics pointed out that the authors were able to present song goodly as well as some scenes of the play, but they still had to work on the overall production. Broadway version was established a little more than two years after the world premiere of the musical.

The history of life and friendship between the two men failed to bring to New York audiences. The show was closed after only 5 regular performances. Production received many negative reviews, though some critics have pointed out that the show was delicate and lyrical. Reviewers have noticed – the musical seemed very sincere, but the atmosphere could easily disappear in the big Broadway stage. The play received 4 nominations for Drama Desk and didn’t win anything else. In addition to the US, productions were also made in Belgium, Danish, South Korea, Germany and Austria.

Actors of Broadway show pointed out that the musical has forced them to take a fresh look at their own lives and personal relationships with close people. After watching the show, many viewers began to restore ties with their old comrades. The story of difficult relations between friends – from the strong childhood friendship to its strong cooling in adulthood – shows how complex the fate of creative people can be. Everyone should be aware that every word can affect the life of a comrade. This understanding came to the protagonists too late.
Last Update:July, 13th 2016