Out Of This World synopsis 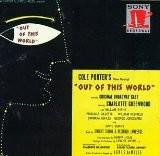 Out Of This World synopsis

Out Of This World Synopsis - Broadway musical

One of ancient gods asked the auditorium to leave the logicality & just to admit the telling that they will hear now. Inside of the group of younger gods, their supreme council Jupiter said he needed urgently to visit the land beneath as he saw in mortal’s world beautiful Helen – a young wife of Mr. Art O'Malley. Supreme god sent Mercury to deal about acquaintance with this woman. Helen & O'Malley soon arrived at the Greek land. They wanted to hear the news about mobster Niki that has left the country to avoid legal prosecution. Mercury’s silver strap-boots should reveal to people his divine essence. He invited just married O'Malleys to lead them to the capital & O'Malleys gladly agreed.

On Olympus, all supremes welcomed Jupiter's spouse, who was the mother of almost all of them. Discovering the next husband’s affairs, a woman suspected that her husband was again drawn into the amorous exploits. The Supreme Goddess has not yet forgotten the legendary story of Europa. She has decided to follow husband & went down on the land. At that time, O'Malleys & Mercury tried to reach Greek’s capital, but due to the skills of conductor, they came to the Arcadian hills. Here travelers have found Niki, who was in the kaleyard with his niece Chloe & the girls from servants. Gangster’s guilt was that he was involved in the production of narcotic cigarettes from poppy. Chloe wanted to get a lover who would combine romance & financial solvency. She did not pay much attention to the young & beautiful shepherd, flirting with her.

Tired of traveling, Helen & Art decided to rest in the lands of Arcadia. Mercury began to flirt madly with girls from servants. Fascinated, god began to recall the famous women he met in his life, but Jupiter’s thunder reminded him of received job. Using the help of a gangster, Mercury sent Art in the Greek capital. He promised – there journalist will find an excellent subject for the news. Upon learning that her husband left, Helen was furious. Arriving on the land, Jupiter sent for the goddess of the night. He asked her to install the longest darkness that world have ever seen. Having what he longed for, God took the form of Art & entered into the bedroom to another's wife.

Unsuspecting about cheating husband Juno guarded the door to the room in the morning when Helen came out of there satisfied. This event was celebrated by the younger gods. Juno decided that the husband turned to Niki & tried to get him to Olympus. Gangster escaped from the goddess, but she went after him. Helen shared with Chloe her happiness. Soon returned her husband, who claimed that all night he was on his way to the capital. A woman was completely baffled. Art persuaded her wife – all was just a dream. Chloe drove away her admirer-shepherd. She decided to conquer the love of Mercury.

On the eve of the summer solstice, Jupiter came for Helen, to take her with him into the world of the gods. Realizing what happened, the woman refused to go to the supreme deity. She chose her mortal husband. With sadness, Jupiter admitted own defeat. In another part of the forest, Juno was upset due to the fact that she was unable to find love neither on earth nor in heaven. Soon, the goddess returned to Olympus, together with her punished spouse. Considering everything carefully, Chloe decided to give preference to shepherd. On Olympus, the Jupiter & Juno sent to mortals a gold cloud, which contained a lot of wise counsels.
Last Update:June, 25th 2016