Of Thee I Sing synopsis 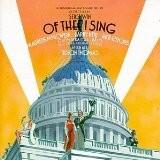 Of Thee I Sing synopsis

1930 John P. Wintergreen is the USA presidential candidate. On the post of Vice-President was nominated a little-known Alexander Throttlebottom. Politicians developed a new electoral idea & asked hotel’s maid what problem concerned her above everything else. The woman said that this is earnings for living. Then maid spoken that to be loved is also included in her priority needs. Politicians have decided to create on that topic the base of electoral platform of Wintergreen. They have started a sponsorship for a beauty competition – the conqueror of it would have to marry future president.

After the start of the long-awaited show, the girls were impatient. Candidate became nervous because of his marriage to unfamiliar person. During judging, he shared his doubts with Mary Turner – a young woman working in the hall where the contest was held. The man admitted that he would like to see next to him a wife that could be a good mother for their future children. Just beautiful woman did not satisfy the candidate. Mary has treated Wintergreen with corn muffin. The man said that would gladly have married her. After the kiss, she agreed to marry him. Soon after, it was announced that the winner was Diana Devereaux. But Wintergreen made a statement – he married Miss Turner. Once a man has treated the judges with corn muffins, baked by Mary, they agreed that this was a decent choice.

At the NY’s meeting, people called to vote for this candidate. Wintergreen presented on stage Mary Turner – just as he did in previous 47 states. A man sang a song of election campaign for her. Eventually, candidate received a grandiose victory. It has been decided that the wedding would take place on the day of the inauguration. The man said good-bye to all the girls whom he previously knew. When the Chief of Justice conducted the ceremony, Diana appeared in the hall. Miss Devereaux handed Wintergreen an agenda – a man should wait for the proceedings for failure to fulfill this promise. However, the Supreme Court has dissolved her claims, considering that cooking of the future first lady overcame the claims of Diana. She was angry and promised to tell all the US population about the dishonesty of the president.

Espoused settled in the White House. The VP was sent to preside in the Senate, thus ending his boredom. Comrades in the party said to Wintergreen that Diana receives a lot of support from the population. In response, the President held a press conference at which he said that only love to Mary matters for him. In the White House arrived French ambassador. He said that Miss Diana was the illegitimate daughter of an illegitimate son of an illegitimate nephew of Napoleon. The man demanded that the president annulled her marriage & fulfilled the promise made earlier.

At this time, a meeting in the Senate conducted to make the impeachment to Wintergreen – French ambassador said that Diana was deceived. Senators were going to make a decision when Mary told them about her pregnancy. They did not dare to invoke the responsibility of the future father. Wintergreen said that the offspring would appear soon. The President refused to comply with the requirement of the French ambassador to give to France his future child. Soon, Mary gave birth to twins. French authorities began to threaten America with war, if they do not give them children. Wintergreen decided to give up the post of president. The post went to Throttlebottom with Diana. Thus, the loving union of John & Mary was saved.
Last Update:June, 25th 2016