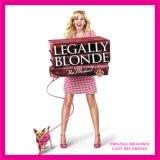 Legally Blonde is the unique story of human reincarnation. In bright colors, it demonstrates what can be achieved by putting a goal and making great efforts for its implementation. In reflection of Elle Woods, everyone can see the part of himself or herself. The project is full of instructive moments and promises. Your main task is not to forget them, but to make correct conclusions and follow a dream.

Spectator of New York Times B. Brantley called Legally Blonde kind and fun action, to which energetic narrative style was inherent. He also noted that the musical has all chances to become the spiritual inspiration for many women, who dream to achieve certain heights in life.

Behind all the comfort and ease, Legally Blonde hides enormous sense. Musical teaches not only how to set a goal and to achieve it, but not to give up. The only obstacle standing in the way of recognition of this production totally motivating is the presence of a certain percentage of naivety. Elle Woods was conceived as a comic character. This is evidenced by her clothes, manner of communication, and behavior in general. Unprepared viewer may feel sometimes uncomfortable to grasp the messages of the musical, when in front of him on the stage is dressed in bright pink blonde telling something about the laws in her funny manner. But from the opposite side, it is wonderful and stimulating comedy.

This project is not exciting in terms of vocal accompaniment. Most of the songs are comedic in nature, and therefore, executed without high energy. Someone may feel not enough the rate of speed, the charisma of the actors, and their singing voices. Song Omigod You Guys represents Legally Blonde fully. It exactly fits all the above characteristics.

There are many reasons to consider this creature as a theater of one artist. In our situation – of one actress. In the Broadway production, the role of first violin played by L. B. Bundy, in London – S. Smit. Who of the girls could better embody the character of Elle Woods on stage? This question is quite difficult to answer because both singers were able to fit the image perfectly. S. Smit better revealed the dramatic side of the Elle. The actress managed to convey qualitative experiences of her character, her fears and concerns. As for L. B. Bundy, she was more like a classic cheerful Miss Woods, which we know from book and film.

Speaking about modern comedy musicals, many experts in the first place remember about Legally Blonde. Why? It's fun to watch. In addition to its primary mission to entertain the audience, it also demonstrates the tenacity with which everyone should fight for own dream. It is pity that every year fewer and fewer musicals illuminate the above-mentioned issues.
Last Update:April, 21st 2016