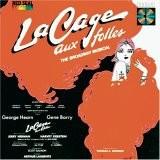 A couple of elderly gay men enjoying life in the city on the shore of the warm sea and each other's company. This is not just a pair of men living together. They are the weird owners of the nightclub named La Cage Aux Folles (“The Cage of The Crazy Ones”). The place is quite questionable, as can be judged on the appearance of people acting in this club. Outwardly respectable George manages the affairs of the place, trying not to give out in his behavior somewhat unconventional inclinations. His friend Albin is a transvestite cabaret singer (he performs under the name of Zaza). This is a typical, stereotypical and somewhat grotesque image of the homosexuality: Zaza is too feminine, campy, whimsical, and with all his theater-like manners, trying to be like a woman.

But one day the life of two elderly birdies literally turned upside down. Georges is visited by his son Jean-Michel (the result of a light affair in his youth), and says that he intends to marry Anne Dindon. It would seem nothing wrong with that. But it turns out that the girl's father is a leader of a party of fighters for moral purity. This prim gentleman is an ardent struggler for morality, a notorious homophobe and bigot. If he finds out what the groom's father do and about his sexual inclinations – the wedding is off. Now the head of the family and his loyal friend must at all costs try to hide the truth, not to let down a couple in love.

It was decided to do so that before the coming of the bride's parents their house looked not like a homosexual’s couple one, but was as much as possible respectable. An attempt was made to remove for a certain time Albin, but capricious "diva" was terribly offended. Nothing can be done: George had to present him as his wife. The head of an unusual family is presented himself as an art person. Accidentally, mutual friend, who does not know what was happening, exposes Albin.

Scandal is upcoming: the parents are trying to persuade Anne to give up the groom, but she loves Jean-Michel very much and is not going to break with him. The situation is saved by Jacqueline, who brings a representative of the press. Paparazzi are happy to shoot the controversial report about the head of the party of moralists, who is in close relations to the canary-transvestite. Georges and Albin offer the bride's parents to hide from papz, but under one condition: the younglings should be together. Chairman of the party of moral purity and his wife, dressed-up as actors in costumes of the nightclub, are hiding from the press. In the final scene, Georges and Albin sing about love for each other. The play ends with a strong kiss of men in love.
Last Update:April, 21st 2016