It's Only Life synopsis 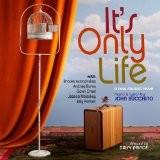 It's Only Life synopsis

It's Only Life Synopsis - Broadway musical

This is not a musical, but a collection of songs from the Broadway cast of five people from second- and third-plans:

1. Brooks Ashmanskas (achievements: 1 Tony nomination, 1 nomination on Drama Desk. He, besides 23 musicals, starred in 1 movie and a couple of times was seen on television).

2. Andrea Burns (born in 1971, achievements: won Drama Desk, had 20 different roles in musicals and tours and participated in records of about 10 albums, as well as has 1 nomination for the Joseph Jefferson Award and 1 Touring Broadway Aw.).

3. Gavin Creel (was born in 1976, achievements: has 2 Tonies’ nominations, 1 Drama League nomination, 1 Lawrence Olivier award, 7 main roles and 13 other roles in musicals and tours, twice met at the TV).

4. Jessica Molaskey (born in 1962, achievements: participated in creation of 6 jazz albums, 2002-2012, starred in several musicals, among which are Cats and has been notices in several off-Broadway spectacles).

All these people were in the collection of songs from different years, which can be played as by a professionals, but more often – as amateur singing, about which the "Video" chapter of this musical shows. Basically, all the music performed by piano and in a fairly rapid paces. They say about all those same aspects of everyday life – a variety of fears, among which dominate the fear of the new and of the future; the desire for self-realization and the rest of the vital issues that can gain popularity among the people. The disc with recordings with 23 tunes, is available in a variety of prices from $5 for used and up to 50 dollars for a new one. Among singles, there are such as: Unexpressed (Gavin Creel); Progression (John Bucchino); Grateful (Billy Porter), and others.

All songs are collected under such a bias to justify the name, "It's Only Life" – and tell about life and its manifestations, in a fairly relaxed atmosphere, without too bright emotions. Quiet plate, which you can listen during the bedtime.
Last Update:April, 06th 2016