How the Grinch Stole Christmas review 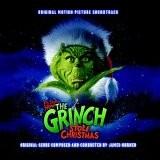 How the Grinch Stole Christmas review

The first thing that strikes in this Christmas musical is the fantastic town Whoville, where ridiculous little men live. Rick Baker deservedly received "Oscar" for the special make-up effects, if to talk about a movie, not stage development. They live near the high mountain, at the top of which, in a cave, evil and opposite Grinch arranged his dwelling. It is possible to treat Jim Carrey differently, but it is necessary to recognize his virtuosity anyway. In this musical motion picture, he continues to please a viewer. Of course, under a thick layer of make-up, it is difficult to recognize the actor at once, but after a while, looking at the mimicry, which is already familiar since "Mask", and on the delightful mad energy of Grinch, it is already difficult to be mistaken that it is Jim Carrey.

The music is very pleasant. It transfers the adult audience to the childhood and creates a fantastic atmosphere of magic. It isn't even necessary to argue about the musical orientation on a little viewer. It seems, in the film and in the stage production, nobody does anything reprehensible, except for one fragment, in which Grinch eats a glass bottle. An adult viewer may see nothing fascinating, except the fairy tale with a doubtful "lesson". But, at the second glance, it is about the spirit of Christmas and very much Thanksgiving day, although the latter isn’t present in the revealed topics. Why? Because we often judge people without knowing their inner world, only by their outward appearance. Grinch in the end realizes that he is a good guy and so the fellows from the town do.

Even the skill of make-up artists Rick Baker and Gail Rowell-Ryan, who, by the way, received Oscar for their work in this movie, strikes, but only for a while. It is because almost all the residents of the town are monotonous. If saying of the stage version, there are much lesser amount of make-up and more entertaining additions.

There are a lot of dialogues and the off-screen author's text in the musical. Perhaps, that’s why children understand almost everything that occurs in the movie, despite a tongue twister of dialogues and the dynamism of the narration. In spite of repellent appearance, Grinch is pleasant to children. And something terrible or frightening doesn’t present in the movie. Most likely, only adults will pay attention to the work of the director, acting and scenery props men work. Little children are too naive for such things. It is enough for them only to believe in a plot. And the film-making crew managed to embody it. What else is necessary for the children's fairy tale?
Last Update:April, 06th 2016