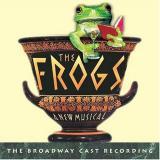 Two actors arguing about what kind of play they want to do today. The first offers to play a tragedy, in which a son kills his father to commit incest, whereas the second one is in too good mood for such things, and in the end, they agree on the comedy. Then, apparently deciding exactly what to choose, they start pulling the beginning with eloquent appeals to the public, but then gods interfere, because the spectacle was delayed too much.

Dionysus wants the great writer George Bernard Shaw to be resurrected from the dead, as he depressed by the state of drama in particular and the devastation of the world as a whole and believes that the resurrection of this character will be able to shake Humanity and to make it think deeper. With that, he turned to his relative, Hercules, who tells about the best way to enter the World of the Dead, and teaches him the necessary tricks. And also warns about the terrible creatures, the Frogs, who swarming in the River of Dead, Styx, through which he will be carried. Dionysus, though cowardly, but perceives the supplied information.

While traveling on the river, Dionysus accurately tells the mythological story about his dead wife, for which he made a crown of stars, to make her look as a real goddess. But she, being mortal, even on Olympus, had died and he was forced to throw her tiara back to skies, and since one of the constellations romantically called The Belt of Ariadne.

At night, Dionysus awakens from croaking (The Frogs) and realizes that he was surrounded by scary creatures. They drag him out of the boat in their Frog realm, from which he escapes, but in just a short time, they drag him back in the water, touting the benefits of a carefree existence, where they do not have to worry about anything, and they jump over each other and fool around.

After landing on the other side, they rush to the castle of otherworldly ruler Pluto (which in Greek mythology was considered the ruler of the Underworld, but other his name became famous more broadly, Hades, which eventually is associated with the Underworld in general). Along the way, they stumble on the other inhabitants of these places – the queen of the Amazons, and Charisma, beautiful servant of Persephone. As Dionysus dressed in clothes of Hercules (to be passed to the Afterlife), the first confuses him with Hercules and starts hostile attacks on him because of theft of one of her jewels, and the second proposes a mutual bath of milk to him. After the appearance on stage of Pluto, he welcomes visitors with open arms, completely destroying the myth that Underground world may be dangerous.

Although the original intent of all this idea was to rescue the Shaw, suddenly William Shakespeare is opposed to this plan. He enters into a philosophical debate with Shaw, which then develops into a skirmish, and then – in a tournament that William brilliantly wins. As a result of reflection and the help of his dead wife, who finds him there, Dionysus decides that too cynical and satirical views of Shaw may be not adequately perceived by Humanity. As a result, Dionysus decides to take the William upstairs, as he is convinced in his superiority. At that, his mission is completed.
Last Update:April, 06th 2016