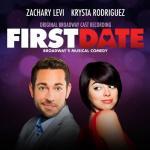 Who doesn’t love a blind date? Of course, by this I mean, who does?

I had one the other day, with the new Broadway musical “First Date.” I’d heard little about the show, and its authors were entirely unknown to me.

Does any of the following sound familiar? An instant lack of rapport; a growing aversion as the minutes pass; a mysterious sense that time has suddenly stopped; a desperate hope that the apocalypse will arrive, preferably right this minute. Magnify those feelings, set them to bland pop-rock music, and you’ll have some idea of the oodles of fun I didn’t have during my evening at “First Date,” the singing sitcom that opened on Thursday night at the Longacre Theater.

With a book by Austin Winsberg and a score by Alan Zachary and Michael Weiner, “First Date” depicts, in all-too-real time, the initial encounter between Aaron (the very winning Zachary Levi, of the series “Chuck”) and Casey (the big-voiced Krysta Rodriguez, of the little-lamented “Smash”), two generically mismatched New Yorkers who’ve been set up by her sister.

Aaron, who arrives at the appointed watering hole first, overdressed in suit and tie and rippling with nerves, is the Nice Jewish Boy with a good job (“investment banking,” “corporate finance,” “mergers and acquisitions” are all mentioned). Yet he has, apparently and none too plausibly, never before been on a blind date. Casey is his opposite, the Artsy Tough Chick who’s all hard angles and wary experience, attired in a flashy leather-and-lace dress and mildly threatening ankle boots.

“She’s kinda indie and pretty hot,” as Aaron sings, “and a lot like all the things that I am not.”

She’s kinda familiar, too: the cool serial dater with a thing for bad boys. Aaron is also a recognizable type: the sweet, slightly nebbishy but cute guy who’s had his heart kicked around. Groaningly obvious, too, is the antagonism that animates their getting-to-know-you banter, which is set to the mechanical rhythms of formulaic television comedies about single guys and gals on the loose and looking for love in the city.

After zigzagging between moments of bonding and alienating missteps (when Aaron learns that Casey’s an old hand at this, he jokingly nicknames her “Blind Date Slut”), these two all-wrong-for-each-other sorts begin to find common ground. Casey flares up in outraged sympathy upon hearing that Aaron’s fiancée dumped him at the altar — another minty-fresh twist — and by the evening’s end, they have established a tentative rapport, just in time for the curtain to fall on a passionate smooch. (Sorry, but no, that’s not a spoiler.)

Annotating the couple’s predictably rocky path to love, or at least a second date, are voices in their heads. Aaron is haunted by memories of his emasculating ex (Kate Loprest) and upbraided by his best buddy (Bryce Ryness) whenever he makes a rookie mistake, like bringing up the emasculating ex. Casey’s primary noodge is her sister, Lauren (Sara Chase), who pesters her about her ticking biological clock and her tendency to withdraw, then scolds Casey when she has the scandalous thought of ordering a burger, lamenting that she’ll “end up on ‘The Biggest Loser — “Gee, I Wonder Why I’m Still Single” Edition.’ ” (Aaron, meanwhile, gets an earful from his buddy when he ponders ordering a “sissy salad.”)

Casey also hears frequently — or rather we do — from her Gay Best Friend (Kristoffer Cusick), who rings her cellphone to give her a chance to “bail out.” Although the character is a noxious stereotype (his parting terms of endearment are “bitch” and “slut”), this song has a certain snazzy comic verve and is among the musical’s rare moments that approach originality. But then the Gay Best Friend comes back a second time, and a third, singing reprises of the same damn song, and your nerves start to fray.

Mine were in tatters long before he came flouncing onstage for the last time, having been shredded by the comic banality of most of the material. When Aaron discovers that Casey’s not Jewish, the supporting cast leaps into action, dressed in Orthodox costume, representing Aaron’s scandalized family. (Chorus: “This isn’t the girl for you — oy oy oy! This isn’t the girl for you — a goy goy goy!”)

When “First Date” tries to be serious, it’s no more inspired. Casey’s big, soul-baring number, “Safer,” brings us the unsurprising news that her tendency to shut down viable relationships stems from a fear of getting hurt. “I go building up walls, yet I wish to be found,” she plaintively sings.

And I wish to be anesthetized, Casey, particularly if you keep going on about Eckhart Tolle and “The Power of Now.”

I have been harsh on this modest musical, efficiently if facelessly directed by Bill Berry, so I should underscore that Mr. Levi and Ms. Rodriguez are both appealing performers. Although his singing is merely adequate, Mr. Levi brings a vitality and off-kilter humor to his performance and succeeds in rubbing away some of Aaron’s more generic qualities with his warmly quirky line readings. Ms. Rodriguez has the drearier role — it’s obvious that the show was written by three guys, since only the female characters are accessorized with flaws — but her singing is ardent and assured.

I also feel honor-bound to report that the audience at the performance I attended seemed to respond with genuine warmth. In fact, they were a virtual live laugh track, erupting with gusts of guffaws at each worn joke or familiar torque in the give-and-take between Aaron and Casey.

But even those who can never get their fill of dating-game gags would have to admit that the singles-searching-for-love thing was a lot fresher back in the 1990s, when “Friends,” “Seinfeld” and “Sex and the City,” along with their lesser ilk, began digging around this terrain. By now it’s been thoroughly strip-mined and needs to be reinvented, not just rehashed and set to mediocre music. A more appropriate title for “First Date” would be “Last Rites.”