Fiddler on the Roof review 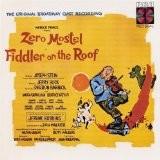 Fiddler on the Roof review

This musical has a lot of interesting stuff in technical indicators. First of all, it is among the top ten musicals on both main stages of the world, Broadway and West End, showing a huge number (3400+ and 2000+ respectively). That's not counting its resurrections. Apart from that, it possesses a bunch of awards and nominations: 1965 (Tony – 9 wins & 1 nomination); 1972 (Tony – 1 win); 1981 (Tony – 1 nomination); 1990 (Tony – 1 win & 1 nomination); 2004 (Tony – 6 nominations; Drama Desk – 3 nominations); 2008 (2 Laurence Olivier nominations). Taken together, they summarize 25 awards & nominations. To put it mildly, very not bad. The musical also visited various places in the international arena – Australia, Europe (Germany, Tokyo, Israel, France, Spain), Africa, both Americas etc.

Like many popular musicals, it has a lot of amateur productions. If we talk only about the reliably known and only in USA, there is information about 500+ shows. The film of 1971 became the biggest box office success of this year & was nominated at 8 Oscars, winning 3. It eventually became so popular that it has created own halo, from which, like the rays, came references to other areas of life, so it entered the pop-culture, becoming part of life and of elementary knowledge about the world. Even parodies were produced on it, that don’t normally happens to musicals. Such eminent personalities as Howard Lovecraft in his work Shoggoth on the Roof parodied it. And a fantastically funny and lovely film Mrs. Doubtfire, where now gone from us Robin Williams performed one of his most prominent roles, parodied a Matchmaker character, which was among the characters of a village, wooing the eldest daughter of the milkman with the wealthy widowed butcher.
Last Update:April, 06th 2016