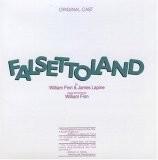 In addition to the fact that production was in the USA about American Jews, which is quite normal, musical was also depicted in Japan, where it has not been altered not for a jot by thence reality and perception. Therefore, for example, the network contains some reviews about Japanese production, where the dialogues and the appearance of actors look a bit discouraging. For example, when one of them entered, saying to all presents: "you are so white", which simply copied from the script, not fitting the context.

Another musical that being gay means taking a risk that you may have the AIDS disease. And so it happens – one of them gets sick and goes to the hospital, which, of course, unable to provide him any significant help. The other, his lover/friend is very concerned about this, but since can help with nothing, decides to arrange his Bar Mitzvah at the hospital. By the way, depending on the production, Bar Mitzvah should happen either to the boy's father, or for the boy himself – at least from the different production subjects it follows as is.

A kind of edification is present in the musical; it turns out, the ability to perform intercourses between gays is depicted as one that should be banned or casted in doubt, otherwise inevitable AIDS occurs. About other sexually transmitted diseases no one thinks, because the whole world fears most of this disease, and such condemnation for some reason on the side of gays goes more than on the side of drug addicted who are in fact the number one risk-group on the planet for this illness. Apart from this strange edification, the musical, though not a comedy, contains elements of humor coming from actors, not from the plot, thanks to the clear understanding of when to make a joke so the hall shook with laughter. It is thanks to this combination of humorous and seriousness, the musical distinguishes from most part of simply serious ones that try more to asleep their audience rather to cheer it up.
Last Update:April, 06th 2016