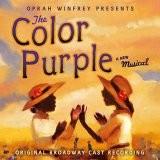 Dark-skinned young girl Celie, only of 14 years old, is pregnant with her second child (obviously she cannot contain herself and not able to protect with a condom). She bursts into delivery right during a church service, and her father tells that they will get rid of this child as well as they did from her first. Celie prays to God that he explained to her what she goes through.

One day her dad sells her into slavery under the guise of marriage to local farmer for 1 cow. She comes to his house and begins to work hard. Her friend, Nettie, runs away from home because of persistent and lecherous attention from her father to live for some time at her friend's Celie newfound husband’s home. But he pesters Nettie on the way to school, and when she runs away from him, she is thrown out of his property. Nettie promises to write letters to her friend, but when Celie wants to send her a letter, her husband, on pain of death prevents her touching the mailbox.

Once the eldest son of a farmer marries, he begins after a while to beat his wife, and she ran away from him. She invites Celie to leave, but she did not want to.

Singer Shug Avery comes to the city, being intoxicated, and Celie caring of her. Shug lives for some time with Celie. Along the way, the singer and Celie become friends. Singer passes to Celie a letter from her friend Nettie, who writes her through these years (about 7 years have passed since they got separated).

Celie learns that all the letters that were written by her childhood friend, were just hidden in the house of her husband. She learns that Nettie travels across the Africa with her family of missionaries and they adopted Celie’s two born children. Now they live in a refugee camp. After 12 years, Celie experience growing resentment to God, because he seemed to be deaf to her prayers, and does not help her neighbors.

Celie finally leaves her husband, accusing him that he had been rude to her all these years, and she went to Memphis. There she finds her talent to make pants, and invents interesting designs. Her husband drinks and is always in a drunken state, so all his friends turned away from him. Business of Celie goes uphill. Her husband began to change for the better, and even sought out her friend, who wants to see Celie. Also, her husband tells her that he fell in love with a young flute player and Celie was in no way discouraged by this fact, and even feels love to self, for the first time in many years. Years later, in her home, on the 4th of July, there comes Nettie and they happily reunited with Celie (The Color Purple).
Last Update:April, 06th 2016