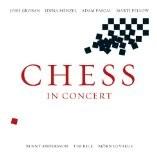 World chess champion – Anatoly Sergievsky, a resident of the USSR, and Freddie Trumper is his main rival and contender for this title. They meet in the capital of Thailand, Bangkok, to win the big chess game, a tournament. Freddie companion named Florence complains to financial agent of Freddie that he does not appreciate her intelligence and talent. This results in the future that she becomes a lover of rival of Freddie – Russian chess player. Freddie is quite aggressive and hot-tempered man. He made a public scandal, and then the personal one from the first game of competition and it all originated in serious reflections of his girlfriend about to part with him.

During the reconciliatory dinner held by Florence between the rivals on a chessboard, on which Freddie comes with a monstrous delay (due to festivals in nightclubs of seductive Bangkok), between Florence and Anatoly comes a spark, and they fall in love. After Freddie appears, he catches them in an awkward time, and his career began to crumble with the private life, as he believes.

Florence and Anatoly become lovers in the open, despite the fact that Anatoly left his wife and children in USSR. The final part of the tournament takes place in Budapest, Hungary, while Florence is given an assignment to detract Anatoly from the tournament, so he would lose it. Anatoly wants to win the tournament, not to return to USSR, preferring to seek political asylum in the United States and to stay here as long as possible. The circumstances are exacerbated by the arrival of Anatoly’s wife at the venue of the tournament. Florence, as it turns out, does pressure on Anatoly due to the fact that she was given to see her father, whom she believed dead, caused by KGB agents, and it was one of the conditions of this meeting arrangement.

Anatoly is distracted during a decisive match and makes an unforgivable mistake, which resulted in Freddie’s victory in the tournament. Anatoly returns to his homeland with his wife. Florence discovers that the man, whom she saw, was not her father. She is abandoned by both lovers as well as deceived by KGB agent of the USSR, which gave her false hope.
Last Update:April, 06th 2016