Butter Outta Cream lyrics - Catch Me If You Can 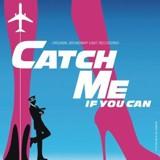 He looked around, deduced his plight
Said this is no way to spend a Saturday night
But he had the style to make things right
So, he made butter out of cream

He kicked his legs up, he tossed and turned
So not to end up a ghost
He did the hokey pokey till the cream was churned
And baby he walked right out and buttered his toast

Now he's on top for goodness sakes
Yeah he's the big cheese of Atlanta Lakes
He's living proof that pop all it takes is a scheme
So if you land in the gutter, just make butter out of cream

When he came to, he heard such a sound
Much to his shock, when he looked around
He had been scooped and was about to be ground
So he made coffee out of beans

He marched to south and he stomped to the north
He had to race against fate
He did the cucaracha while those tears poured forth,
And senor things began to percolate

He held his breath and swam to the top
He borrowed beans from his mom and pop
and opened up his own coffee shop
out in queens
When his eyes were almost off, he
just made coffee out of beans