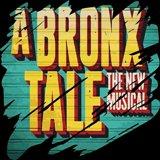 Sometimes plain old pasta with red sauce is just what the doctor ordered. “A Bronx Tale,” which opened at the Longacre Theater on Broadway on Thursday, might be called the musical-theater equivalent of that classic comfort food. It doesn’t break ground or dazzle with an unusual recipe — like, say, mixing rap and American history — but it delivers reliable pleasures with polished professionalism and infectious energy.

Chazz Palminteri wrote the book, which was adapted from his solo play. More may know the material from the movie version, starring Mr. Palminteri and Robert De Niro, and directed by Mr. De Niro, who shares that chore here with the veteran Jerry Zaks. All told, Mr. Palminteri, who revived his original 1989 solo show on Broadway in 2007, has made a profitable career, and provided much entertainment to audiences, repackaging (albeit loosely) his upbringing in an Italian-American enclave in the Bronx.

If there’s a secret ingredient that gives the musical version a zest that freshens the material, it is — perhaps obviously — the wonderful and ample score, featuring music by Alan Menken and lyrics by Glenn Slater. Mr. Menken is known for his long association with Disney material like the animated movies “Beauty and the Beast,” “The Little Mermaid” and “Aladdin,” all of which became Broadway shows.

But the score for “A Bronx Tale” harks back to the rhythm-and-blues-inflected sounds of “Little Shop of Horrors,” his first successful musical, written with Howard Ashman (with whom he collaborated on the first two of those Disney shows).

Although the score has its fair share of traditional musical-theater balladry, the smooth grooves of Motown and doo-wop and early rock ’n’ roll provide the driving energy of the show, which is set in the 1960s, when radios were blaring R&B from every window. A male quartet singing silken four-part harmonies is woven into several scenes, including the first, when me meet the central character, who is also the tale’s narrator, Calogero, played by Bobby Conte Thornton as a teenager and by Hudson Loverro as a 9-year-old.

The tale, you may recall, focuses on the younger Calogero’s fateful witnessing of a brutal shooting committed by the neighborhood’s biggest hood, the much-feared Sonny, played by Nick Cordero (Mr. Palminteri in the movie). When called before the cops to identify the killer, Calogero, taking his cue from his parents, who fear retribution at the hands of Sonny, refuses to finger him, earning his enduring gratitude.

But while Calogero’s father, Lorenzo (Richard H. Blake), assures him that he was right to clam up — “You did a good thing for a bad man,” he tells him — Lorenzo (Mr. De Niro in the movie) grows increasingly alarmed when Sonny begins taking Calogero under his wing, giving him the nickname C and having him run errands, quite profitable ones. As boy grows to teenager, his hero worship only increases, and Lorenzo and Sonny engage in a tense tug of war for Calogero’s soul.

Later, in a slightly hackneyed romantic subplot that’s more or less swiped from “West Side Story,” Calogero’s life is further complicated when he becomes sweet on Jane (the radiant Ariana DeBose), a girl in his high school who happens to be black. In the Bronx in the ’60s, the Italian and black populations didn’t mix much.

At a refreshingly brisk two hours, “A Bronx Tale” moves through the story of Calogero’s conflicted loyalties at a rhythmic clip that’s enhanced by the lively, idiomatic choreography of Sergio Trujillo. Even the sleek and simple sets, by Beowulf Boritt, featuring period fire escapes and storefronts, are light on their feet, sliding into place and reassembling almost in time to the music.

And the actors dig into their characters with a fine commitment. Mr. Blake evinces Lorenzo’s paternal concern about the fate of his beloved son movingly, advising him (in slightly maudlin terms, admittedly) to “look to your heart.” Mr. Loverro brings spunk and energy to spare as the young Calogero, in thrall to the dark glamour of a man whose swagger dwarfs the sturdy dedication of Calogero’s father, a kindly fellow who drives a bus, hardly a career that can compare to the seductive appeal of Sonny’s easy money.

As the older Calogero, Mr. Conte Thornton sings with a rich tone, and the continuity between the boy and the young man feels natural (although they hardly look like relatives), so that we see in the divided heart of the teenager the remnants of childish infatuation that keep him under the thumb of Sonny long after he begins to see the brutality that he has embraced. And the terrific Mr. Cordero radiates a cool charisma that mixes a surface geniality with shrugging ruthlessness.

“A Bronx Tale” is certainly not without its formulaic or sentimental aspects. Few mainstream musicals are. But it captures both the milieu it evokes and the colorful characters who populate it with a buoyancy and humor that ultimately won me over. Public service announcement: If you’re already mourning the imminent closing of “Jersey Boys,” this is the show for you.