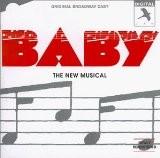 Unsophisticated name – Baby: The Musical – allows you to think from the beginning that this play is about what is usually told in all such mundane plays: how it is difficult to raise children, how fast they grow, how they have the first word, the first step, and similar components of the carousel of life that is so inevitable, so it has already stuffed on edge to all except of lisping vanilla mothers.

However, the show about kids does not have children themselves – are only feelings about the upcoming birth from the couples who already know that they are pregnant, and from one couple who wants to become a happy owner of the information that they too are expecting. Three different couples, six people of different genders, different ages, experiences, attitudes and social positions. Some – those who had three children – afraid that now their lives will not be like they wanted them to be – spending their old age for themselves. But at the same time, they have no choice because they accidentally became pregnant. When the last of their baby has graduated from the college, they celebrated and accidentally overdo it.

Another couple who is just starting to live themselves is college graduates (between the past and this pair there is no family ties, as one might be assumed logically), the knowledge of a new child turns their world upside down, and their first reaction is fear. Fear that they will not deal it, fear before all unknown and the uncertainty in the tomorrow day.

Very good staging of joint and single acts is a distinctive feature of this musical. Without it, there would be no interest in watching it. Without a good investment of experience of older pair and a charming expression of young couples who are in the age ranges between 20–30 and 30–40, the production would be just another usual treatise about inevitable cycle of life – children growing up, the fear of a new… All cumulatively – the book, the choreography and the acting, in which you believe, give a definite interest in everything happening on stage. Does it merit of actors, director or anyone else that the musical did not last on the scene for a couple of seasons? Probably not. They did everything that depended on them to make this musical lively and understandable to as many viewers as possible. Is it bad that it only lasted for a couple of seasons? Rather, it is the inevitable whirlwind of life.
Last Update:April, 06th 2016