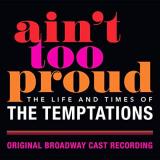 The less you know about the Temptations, the more you’ll get out of “Ain’t Too Proud,” a finger-snapping, hand-clapping new jukebox musical passing through Los Angeles’ Ahmanson Theatre en route to Broadway, where it is scheduled to open at the Imperial next spring. This nearly-all-black show’s got a lot going for it, between the sheer quality of the beloved R&B vocal group’s catalog and director Des McAnuff’s experience with such material (including the Four Seasons tuner “Jersey Boys” and “Summer: The Donna Summer Musical”), and yet, considering that the Temptations — who are, incredibly enough, still touring — have several SoCal playdates this September, it’s hard to compete with the thrill of seeing the actual group in concert.

Of course, we could debate all day whether today’s Temptations are still the same Temptations that broke through in the ’60s and ’70s with such hits as “My Girl,” “Just My Imagination (Running Away with Me),” and “Papa Was a Rollin’ Stone.” The group has cycled through no fewer than 24 members over the years, and that interchangeability becomes the subject of Dominique Morisseau’s book, in which Derrick Baskin, as Temptations founder Otis Williams, talks us through a simplified version of the group’s making and unmaking — already well-documented in NBC’s 1998 miniseries — focusing on the so-called “Classic Five” and how their dynamic was affected by woman troubles, drugs, illness, and, of course, clashing egos.

Like a talky lounge act, or one of those Disney television specials in which old Walt served as our folksy on-camera host, “Ain’t Too Proud” does more telling than showing, alternating between narration (drawn from Otis Williams’ memoir) and short samples of classic R&B hits — a surprising number of which aren’t Temptations songs at all. For example, the show first soars with “Shout,” during which audiences can hardly resist joining in, while some may find themselves saying, “I didn’t realize this was a Temptations song.” (It isn’t. That song belongs to the Isley Brothers, but provides the burst of energy needed near the opening.)

Still, with slick coordinated dance moves and charisma to burn, these talented crooners do a fine job performing an exciting mix of classic R&B hits, whether they’re covering the Temptations or another group entirely (as a governing rule, all songs are drawn from “the legendary Motown catalog”). Between snippets of old favorites, which typically run no more than 30 seconds, “Ain’t Too Proud” paints the picture of how the group came together. Inspired by the Cadillacs (in a scene featuring their song “Gloria”), Otis decides to assemble his own group, first Otis Williams and the Distants, then the Elgins, and finally the Temptations — though it took them 24 singles before one of their songs finally landed on the charts.

There’s a cute scene in which Otis attempts to enlist power-bass Melvin Franklin (Jawan M. Jackson), who interested but insists that first Otis must convince his mother (Nasia Thomas, later Diana Ross), and a history-making encounter with Motown Records honcho Berry Gordy (Jahi Kearse) in a Detroit men’s room. Gordy introduces them to silky songwriter Smokey Robinson (Christian Thompson), who is arguably the secret to the group’s success, and assigns them manager Shelly Berger (Joshua Morgan, the ensemble’s only white face). But fame has its price — as every musical biopic ever so slavishly reminds us — and things go predictably awry when lead singer David Ruffin (Ephraim Sykes) and falsetto Eddie Kendricks (Jeremy Pope) start to believe their own hype, and choreographer Paul Williams (James Harkness) struggles with alcoholism.

Early on, Otis learns that his girlfriend Josephine (Rashidra Scott) is pregnant, resulting in a hasty wedding and the birth of a son whose half-ignored childhood lends an emotional depth to “Papa Was a Rollin’ Stone” in the show’s final 10 minutes. Although Otis doesn’t get a proper solo until the very end, his personal life inspires the show’s best number, in which jaded wife Josephine sings “If You Don’t Know Me by Now” (again, not a Temptations song) with all the intensity that “Dreamgirls” star Jennifer Holliday brought to “And I’m Telling You I’m not Going.”

Speaking of “Dreamgirls,” “Ain’t Too Proud” ain’t got nothing on that musical, with its original songs and whirlwind retelling of Motown history. Even though they’re just supporting players in the Temptations musical, the trio playing the Supremes easily upstage their male co-stars, putting the lie to the outsized claim that the Temptations have been called “the best group in the history of Rhythm and Blues.” (Technically, anyone could call any group that, though who could top the Supremes?)

In any case, compared to “Dreamgirls,” this show feels like a glorified PowerPoint presentation, using high-power projectors to beam the names of tour stops and black-and-white photos and footage (such as headlines announcing Martin Luther King Jr.’s assassination, or B-roll of Vietnam) onto the relatively simple set. A rotating disc and horizontal treadmill allow for some creative staging, but it would’ve taken a more creative script to match the energy of the music itself.

If anything, the unexpected takeaway of “Ain’t Too Proud” — which reveals that the songwriting was often more important than the singers — is that so many of the Temptations’ hits could have been performed by any well-cast vocal group, and that they could have made many other Motown songs sound twice as sweet.
Last Update:February, 28th 2019