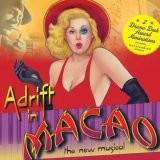 This statement is on the one act (without intermission), which in a slow and relaxed form tells of one evening in the life of a musical opium club, located in Macao (now is called Macau) – a province of China. During the performance, we are told how a lady with a very curvaceous forms – and it is often emphasized everywhere, starting from critical reviews, ending with the play itself – comes to the city and gets a job the same evening. The work is – to be irresistible and feminine at the same club, the owner of which it struck on the spot by their irresistible forms in tight clothes. Once again proving that it is important to come to an interview in spectacular costumes – you never know what position you will be offered.

"Ticky Ticky Tocky" and "Mister McGuffin" are outstanding songs written by a very talented young man, the new genius of Broadway, Peter Melnick. He was able to combine sounds of surroundings of 1940 – 1960's, nostalgic, but not too much, notes, creating a very pleasant mix that we blessed for all 90 minutes of play.
We meet caricatured characters along the way – Chinese Tempura (“shrimp” in Chinese, Malay, Thai and Indonesian languages), and opium woman who represents all descended addicts (at least those who have not yet fallen to the very bottom of utter hell of China, which you can find in the poor men’s stash). The other characters are very colorful personalities – Corinna, Lureena (women with similar names), Rick (people of 2010 – 2016 firmly associate this name with main character of mega-popular The Walking Dead serial movie from AMC, Rick Grimes).

What binds all these motley people together? Like the heroes of Casablanca, who were waiting for their visas, locals also waiting for something. But they do not know what it is exactly. They just stay in this space here and now. And the walls in this musical made in order to emphasize not an enclose space from which the heroes do not wish to go out. No, the characters are free to leave any moment, but just don’t do this. And why – no one can reliably explain. Does it matter? Maybe they like to play the comic situations and generate a variety of jokes out of thin air. Or maybe they simply have nowhere to go this evening and the club is the only place tonight, where the doors are opened and where they hearts want to be?

Someone even compares this play with films by Alfred Hitchcock. Someone said that this musical can be visited with their children to provide them a great evening together with their parents and sparkling humor. And someone says that the story is not as important as the entourage, which created by the entire staging – sweet, gentle, charming and musical. And, above all, funny.
Last Update:April, 06th 2016