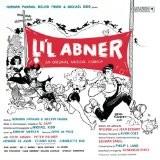 Li'l Abner is an original musical of the end of 60s, which became an instant classic of the genre of satirical comedy. The project is based on the comic book series of the same name by Alfred Caplin. The American society has not developed a consensus on the mentioned issue: some favor open derision of incompetence of the US government (of those times), while others strongly protest against the too critical position of the author on the basic ideas of American society. The same fate was waiting for directors of this musical, when they have decided to create it. Nevertheless, it was worth it and the play paid off. Lyrics were written by Norman Panama & Melvin Frank. The lyrics belong to J. Mercer. Music’s author is Gene de Paul.

The first Broadway’s show was on November 1956. Since then, New Yorkers were able to visit 693 performances. Such an impressive number of productions was due to extraordinary interest from viewers. Some of them have visited dozens of it in order to enjoy once again the satirical comedy of Alfred Caplin in the performance of the country's best artists.

The production has received positive reviews from critics. The only remark, which was unanimously voiced by the majority of spectators, that the theatrical adaptation was not able to transfer flawlessly the spirit of the comic book. Artistic performance was marked by high ratings. In particular, Michael Kidd, performing the title role, won the Tony Award. Brooks Atkinson from the New York Times praised the choreographic talent of the artist, saying that if everyone were able to move the same as Michael, in professional ballet there would be no room left for other talented guys.
Release date: 1956
Last Update:April, 21st 2016