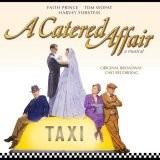 The first production of this show began in 2007 in San Diego, in Old Globe Theatre, both reading and tryouts. The official opening was in the same year in September, and continued as a pre-Broadway show for a month. July 2008 marked the end of the show under the directing of John Doyle, after 116 performances and 27 previews. Casting was as follows: T. Wopat, F. Prince & B. Fierstein. The show, despite the very modest duration, received as many as 12 nominations for the Drama Desk, but did not win any of those. Such a number of nominations was the largest quantity among other musicals that took place on Broadway in the winter season of 2007 – 2008.

Critics were mostly cold to this musical, giving it not only mixed, but also many negative reviews. For example, New York Times wrote that the musical was based on narcissism, and it lacks the highlights, for example, of well-choreographed movements and living heroes. New York Post wrote that everything here was flat, including the plot and emotions that were almost completely absent. Around the same vein were the rest of the reviews, but some of them have recognized the liveliness of the musical characters.
Release date: 2008
Last Update:January, 13th 2016