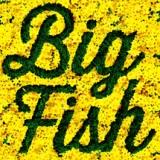 Big Fish is a musical with music and lyrics by Andrew Lippa and a book by John August. It is based on Daniel Wallace’s 1998 novel, Big Fish: A Novel of Mythic Proportions, and the 2003 film Big Fish written by August and directed by Tim Burton.

Big Fish revolves around the relationship between Edward Bloom, a travelling salesman, and his adult son Will, who looks for what is behind his father’s tall stories.

The story shifts between two timelines. In the present-day real world, sixty-year-old Edward Bloom faces his mortality while Will prepares to become a father himself. In the storybook past, Edward ages from a teenager, encountering a Witch, a Giant, a Mermaid, and the love of his life, Sandra. The stories meet as Will discovers the secret his father never revealed.

The musical plot differs from the 2003 film in certain aspects. The mythical town of Spectre - and Edward's quest to save it from destruction -- has been folded into Edward's home town of Ashton. In the musical, The Witch and Jenny Hills are two distinct characters. In the film, Jenny Hill and The Witch were aspects of the same character played by Helena Bonham Carter. The character of Norther Winslow, played by Steve Buscemi in the film, doesn't exist in the musical, nor do conjoined twins Ping and Jing.
Release date: 2013
Last Update:December, 10th 2015