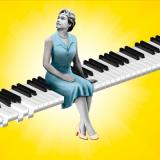 San Francisco hosted the play in 2013 as a part of framework of pre-Broadway run, for 1 month of autumn in Curran Theatre. Director is M. Bruni, J. Prince was responsible for the choreography & J. Howland was the musical director. Jessie Mueller was starring. The high quality of production confirms by the fact that during the whole month, musical tickets have been sold out.

It is not surprising that the Broadway production took place (at Stephen Sondheim Theatre) and played for 4 months, and in autumn of 2015 a tour in the United States began (from September), starting from the Providence Performing Arts Center.

Actors in addition to J. Mueller were the following: J. Spector, A. Larsen & J. Epstein.

West End musical spotted the appearance in February 2015 in the Aldwych Theatre, furthermore the full composition of the cast had been replaced and now there were: L. Want, K. Brayben, I. McIntosh, A. Morrissey, G. Barber & G. Trainor. Since the end of November 2015, there was a change of actors – C. Janson instead of K. Brayben, and D. Keen instead of G. Barber.

US tour began in Rhode Island and throughout the year, till August 2016, with the end in San Francisco, it has to go according to the planned. Abby Mueller will take a major role – the sister of Jessie Mueller, who originally played Carole, and other actors in the lead roles will be L. Tobin and B. Gulsvig.
Release date: 2013
Last Update:December, 09th 2015