A Day in Hollywood / A Night in the Ukraine Musical Lyrics 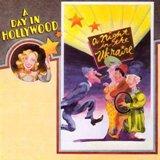 A Day in Hollywood / A Night in the Ukraine Lyrics

A Day in Hollywood on its 1st part is about singing, dancing and their numbers are done by bailiffs in Gruman's Chinese Theater. So is the first half of the exhibit there are characteristic tunes, dancing numbers each accomplished by a bunch of people. A plenty of parts are soaked with spirit of colossal musicals of the silver screens.

This performance totally lived through more than 165 shows on West End until it had retired, since March 1979. Broadway's opening it experienced on May, 1980 and one year ago it was closed after almost 600 shows. Fellows with almost the same names, Tommy Tune & Thommie Walsh - were those who directed and choreographed it all the time.

Tony Walton performed the scenic design. Totally 24 tracks of funny and sad musical direction is what may be highlighted in this piece.
Release date: 1980
Last Update:July, 25th 2016