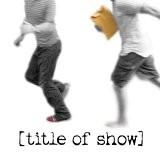 This performance is a musical about musical. The creators are the same as heroes in the story. This staging is based on a book, written by H. Bell, while the songs were created by J. Bowen. The production tells us about its own process of creation.

This staging appeared during Theatre Festival in NY City, in autumn 2004. The first display took place at Manhattan Theatre Source. It happened in summer of the same year. That time, the producer was L. Camien. H. Bell, S. Blackwell, J. Bowen, and S. Fernandez were among original cast of actors. The first several performances anticipated its great premiere in NY. During NY festival, the same producer was chosen. The event took place at Belt Theatre, where were six displays in total.

Off-Broadway musical first appeared in 2006 at Theatre of Vineyard. This staging obtained several Obie Awards in direction, acting and writing.

Previews on Broadway were initiated in summer 2008. The first display was at Lyceum Theatre. Official opening came in a week. Performances lasted for four months and there were 102 of them. McCollum, Vineyard Theatre, Camien, Stewart and Miller produced the show. Michael Berresse was selected as a director, while the leading roles were played by H. Bell, S. Blackwell, H. Blickenstaff and J. Bowen. This cast was the same for all versions, including the tour one.

Besides several Obie Awards and one Drama League Award in 2006, this spectacle also received GLAAD Media Award in category of Outstanding NY Theatre (both for Off-Broadway and for Broadway versions) in 2007 and one Tony for the Best Book of Musical in 2009.
Release date: 2006
Last Update:July, 18th 2016