They're Playing Our Song Musical Lyrics 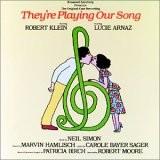 They're Playing Our Song Lyrics

The musical is staged based on the script of the American playwright N. Simon, music by M. Hamlisch, libretto by C. Sager. The premiere was held at the Ahmanson Theatre in LA in 1978. After 11 preliminaries, the histrionics opened on Broadway in the Imperial Theatre in February 1979. 1082 performances were shown. Director was R. Moore, choreographer – P. Birch. Involved actors: R. Klein, L. Arnaz, T. Roberts, S. Channing, V. Garber, A. Gillette & T. Wass. In 1979 started the national tour on the US.

The play has been showed abroad for many times. The London’s West End hosted in October 1980 the first show in Shaftesbury Theatre with the main actors T. Conti & G. Craven. The musical was very popular and did not go off the stage for two years. It was closed in May 1982. Australian exhibitions began in August 1980 in the Sydney’s Theatre Royal. Actors were: J. Waters, J. Weaver & R. Burchmore. Performance in Argentina was in 1980 with actors V. Lynch & V. Laplace.

In 1990, there was a new production with the same actors. In the Philippines, show was in Singapore Repertory Theater in 2000 with actors L. Salonga & A. Pang. The Brazilian performance was shown in 2009. Actors were T. Aguiar & A. Acosta. After every major play – Broadway, West End, Australia – record companies made recordings of its songs.
Release date: 1979
Last Update:July, 18th 2016