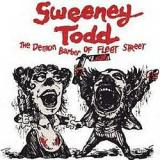 The music and lyrics written by S. Sondheim, libretto – by H. Wheeler at the eponymous play by C. Bond. The actor and writer, C. Bond has processed the finished piece, the text and meaning of which were pretty clumsy and unfit for the stage version, as for him. The author added morale and made from the main hero not just a cannibal psychopath, but a man who suffered at the hands of those in power taking the path of revenge. The complexity of the story and focus on the revenge he drew from the works of Alexandre Dumas.

After seeing the play on the stage in 1973, S. Sondheim immediately planned to put it into a horror musical. In addition to vocal numbers, the show contains dialogues in prose.

The premiere saw the light in the Uris Theatre, New York in 1979 with L. Cariou, A. Lansbury, M. Louise & S. Rice in the leading roles. Choreographer became L. Fuller, costumer – F. Lee, scenery maker – E. Lee. The musical was produced 557 times and was closed in 1980. Immediately after closure in Uris Theatre, the histrionics was launched in London in the Theatre Royal Drury Lane in July 1980, exhibiting 157 performances. Starring: D. Quilley & S. Hancock in main roles. Libretto and staging have not been changed. The theatrical of J. Doyle was released on Broadway named ‘Circle in the Square’ in 2005.

The play has won numerous awards. In the year of release, it received 8 Tony Awards, including prizes for Best Musical, adaptation, music and libretto. The production in the USA was noted by NY Drama Critics Circle Award, and in the UK it has been rewarded with several Laurence Oliviers.

This spectacular also has television version, concert, opera, and the original Irish production. In 2007 was released the same-named film of Tim Burton with Johnny Depp, Alan Rickman and Helena Bonham Carter in the lead roles. All the actors performed the vocals themselves, including supporting characters.
Release date: 1979
Last Update:July, 13th 2016