Most Happy Fella, The Musical Lyrics 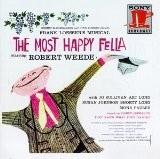 Most Happy Fella, The Lyrics

The most part of the musical was created by just one man – Frank Loesser. He was responsible for the music and lyrics. He was also the one, who recommended a play, which performance was then based upon. It was written by S. Howard.
Some parts of a play were omitted, including religious and political issues. The idea to create a show appeared in 1952. It took 4 years to bring it to life. From the very beginning, “Most Happy Fella” was described as opera. Critics also referred to it as music drama. But it is still thought to be close enough to opera.
Broadway premier happened in May 1956. Joseph Anthony became a director, K. Bloomgarden produced the musical, J. Mielziner created lightning and scenic design and D. Krupska was responsible for choreography. The show was first staged at Imperial Theatre and then the following year, moved to Broadway Theatre. List of actors includes: R. Weede, J. Sullivan, A. Lund, S. Johnson, S. Long, M. Paulee and Z. Bethune.
The audience had enjoyed Broadway production for more than a year. Besides, this musical had a new life after some time. It was staged at New York City Centre. There were only sixteen performances there though. There was also a West End version, displayed in 1960 at London Coliseum with almost 300 performances.
In 1979, there was Broadway revival, which took place at Majestic Theatre. Later, in 1991, another production in NY at City Opera was held.
This theatrical was nominated for many times since 1956. It received two Theatre World Awards, one Tony for the Best Performance and a Drama Desk Award for the Outstanding Featured Actor in a Musical.
Release date: 1956
Last Update:May, 16th 2016