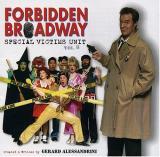 This is a set of musical numbers, in which their creator – Gerard Alessandrini – makes a various kind of mockery to Broadway, West End and Hollywood. It is a soft joking at the most popular items amongst musical world at the time of staging. Although this is an off-Broadway show, it has become one of the most known in the strata of musicals at all. Here in this production for more than 30 years the public has seen more than 300 different musical numbers, as they change from time to time, and almost every spectacle includes some new parts and elaborates new facets of the humor.
Last Update:July, 13th 2016