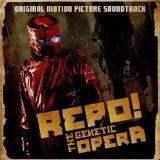 In 1996, Darren Smith witnessed the dramatic bankruptcy of his friend, whose property was confiscated without foreclosure. This story has seriously affected the young composer. Eventually, he came up with the future world, where in the case of non-payment from a person were extracted parts of the body in the same way as if they were an ordinary property. D. Smith met future collaborator in musical Terrance Zdunich in South Coast Theatre. In 1999, they created the duet ‘The Gallery’ and began to compose 10-minute operas. Two authors presented their works in different clubs of Los Angeles. For the musical part was responsible D. Smith, while T. Zdunich performed mini-operas. For the first time the future world appeared in the history of man, who was forced to engage in looting the graves, to earn money for the next payment for the operation of organs transplantation. This 10-minute opera was really liked by the audience, and the authors decided to expand it to a full-scale musical.

In 2002, D. L. Bousman joined the duo – he wanted to do the screening adaptation of the show. After 4 years, the director shot short film to preliminary exhibition of it to the producers. After 48 hours from that moment, LGF / Twisted Pictures have provided funding for the adaptation of the production. The film did not include a significant number of songs that were present in the original musical. Due to the change in management of the company, in advertising of the finished motion picture no funds were invested before the premiere. The financial failure of the film destroyed the authors’ plans to shoot the prequel of the story. Critical reviews on the picture were mostly negative. Have been marked excessively gloomy atmosphere of the film, violence and obscene language of characters. Nevertheless, there were viewers who evaluated well the phantasmagoric world of the future, and the ambiguity of the characters of the picture.
Last Update:July, 12th 2016