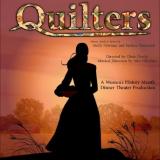 At the heart of the musical is a book ‘The Quilters: Women and Domestic Art’, created by Norma Bradley & Allen P. Cooper. In this work were collected stories of real immigrants who mastered the Wild West. The authors used records from the diaries of women who left after their husbands to distant uninhabited regions. Artwork of B. Damashek and M. Newman consisted of separate stories, almost unrelated to each other. Around women, creating a quilt, these stories were constantly reproduced. The actresses playing the daughters were transformed into other characters, regardless of their gender. They show the audience joy and sorrow faced by the first settlers in the unexplored and wild lands.

Designer Sandy Eggleston widely used a variety of colors when creating outfits for a musical. Bright costumes of member underlined that, despite the great difficulties, people continued to seek their fortune far away from civilization. They have created a little feasts and celebrations for themselves. Thanks to stenography of Maggie Modig, audience saw on the stage: windmill, wood-burning heated stove, fences and straw. This has contributed to plunge of the audience into a special world of pioneers and their way of life. Soft lighting of Rick Swink also helped to reproduce on stage that distant time. For Paul Loebach, production in 2016 was the directorial debut. According to the critics, he was able to combine skillfully different stories in one concise mosaic.

Broadway version has not caused interest among the public. To its low popularity also contributed negative reviews from critics. According to many reviewers, the musical did not give the impression of a concise show – it was a set of different numbers, united only by a common theme. Also was noted too much static of performance’s artists. But there were critics who turned their attention to the positive aspects. Easiness and honesty of the play made a good impression on the impartial spectators. Also considered that the basis of the play were real stories of women-migrants. Despite the brevity of stay on Broadway, the musical was 6 times nominated for Tony. Modern productions were accepted by critics more favorably than the original one. Interest to many musical numbers from the audience allowed this show to continue its theatrical life.
Last Update:July, 08th 2016