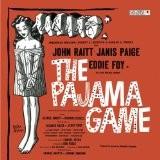 At the heart of the musical is the novel ‘7½ Cents’, written by R. Bissell. A major role in creating this work played by a composer & lyricist F. Loesser – he composed two songs for the musical. Thanks to his support, young authors J. Ross & R. Adler were able to write other songs for this play. It was the second collaboration of young composers. It brought them fame and popularity. After the third and also very successful work, the duo broke up – Jerry Ross died at the age of 29 years. Young choreographer Bob Fosse was invited to create the musical numbers thanks to the patronage of his wife, the actress. At the insistence of managers, director George Abbott turned to J. Robbins – in this way they wanted to reduce the risk of inviting the inexperienced director. Choreographer agreed to be the understudy to Fosse, but he demanded for himself the post of co-director and a bigger fee. The only merit of Robbins may be considered that he was able to convince George Abbott not to cut from the performance interesting number invented by B. Fosse.

The Broadway production in 1954 as a dancer involved then-little-known actress S. MacLaine. She was also the understudy of C. Haney, who played the role of Gladys. When the leading actress injured her ankle, her place was taken by MacLaine. Dancer played Gladys for a few months. In her memoirs, Shirley noted that she came on the scene, never rehearsing her role. Due to the excitement, she dropped her hat, which according to the number, she supposed to throw over her head. Expressing own strong feelings with loud phrase ‘Oh, sh**!’, MacLaine greatly shocked the audience. But after the completion of performance, the audience gave standing ovations to the actors. Instantly becoming a famous, actress has signed a 5-year contract with H. B. Wallis, who represented the company Paramount Pictures. In 1957, the production was filmed by Warner Bros.

In 2013, at the Theatre Festival in Chichester has been shown the next version of the musical. During the transfer of production in the West End, producers decided to draw financing from the ordinary people. But it was not just a simple charity. Now every person, invested in the production of the musical, became a full-fledged investor. Once the staging pays off, people should begin to receive their share of the profits. Using such an approach, producers could attract 200 thousand pounds from 218 investors, which accounted for 14% of the total cost. The money was collected for 2 months. This is the first musical, which used a similar method of financing to obtain funds for the establishment of production. Critics have praised the musical highly, noting its ease and romanticism, despite the presence of political scenes.
Last Update:July, 06th 2016