Merrily We Roll Along synopsis 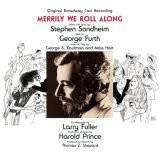 Merrily We Roll Along synopsis

Franklin is in the center. He is moneybag, illustrious & puissant composer & film producer. After a brief acquaintance with the specified character, musical’s events gradually rolled back on more than twenty years ago. The audience will have a unique opportunity to track the way of life of the protagonist from the poor, but very talented composer, to modern shark of show business, whose opinion is considered without exception high-ranking by all cinema figures.

1976. The thriving opening night of the last film of Frank has become an occasion for a chic fest in an expensive mansion on the outskirts of LA. In it, there are many colleagues of producer. They give the protagonist generous gifts, as well as lovely praises in his address. His old friend is also present at the celebration – theater critic Mary Flynn. She is strongly frustrated because Shepard completely abandoned musical activity & now is surrounded by lots of empty & dull-witted people. While at the same time, she is aware that in the world of production of commercial films with her friend almost no one is equal.

1973. Frank & Charley Kringas going to give an interview in one of the television studios of New York. From behind the scenes, Charley meets Mary & tells her that the main character is unlikely ever return to write the shows. Mary, whose alcohol consumption constantly aggravates, admits that it was she who organized this meeting. The main objective was to get Frank to confirm publicly his participation in the creation of the next show, which has been developed by him & Charley for several years. But during the live broadcast, atmosphere in the studio is heated strongly & serious conflict between the characters arises. After recording, Kringas trying to reduce somehow the degree & asks for forgiveness to Frank. However, the latter does not want to listen to anything. Thus ends the period of cooperation amidst two incredibly talented people & begins the era of Franklin’s solo.

1966. Frank tries to divorce his wife, Beth. Perhaps, the process would not take so much time, if there were no questions which parent will get tutelage over their immature sonnie. The events, which previously took place in the courtroom, attract the attention of almost all journalists of the city. The latter hope to catch any gossip for the future material. The son remains with his mother, & they leave on the first flight to Houston. Frank is depressed, but comforted by faithful friends, especially Mary & Charley. They convince the main character to go on a cruise, to be a little distracted & to rethink his life.

In 1964, Frank & Charley publish the first Broadway hit. In two years before, the main character gets acquainted with Gussie. He sees in the lassie own muse & agrees to make exclusive compositions for her. 1959. Frank with his cooperates ceaselessly plan own future & draw in detail a clear action plan. Actions take viewers in 1957. Frank & his girlfriend at the top of an old building in NY waiting to see the first earth satellite on the orbit. After some time Mary joins them. The main character goes away to play the piano. Heard from the apartment music affects girls. They say to Frank that he has an incredible talent & in the future may become the greatest composer.
Last Update:May, 16th 2016