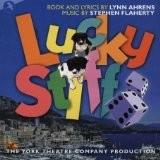 Lucky Stiff is a dynamic comedy that keeps the spectator in attention throughout the musical. The performance delivered with humor; there are many funny scenes. Looking at the action, you know: Harry – a real lucky one who managed to change the boring life of a shoemaker for a trip to Monte Carlo, full of adventures. And the main winning ticket, which he was able to pull out – is love.

Opinions about the performance from the audience were mixed. For example, one said that this was a collection of individual scenes and musical numbers, weakly interconnected. The story itself was not innovative, only constant singing. The strength of the play was in a good acting, but it was impossible to receive a really good pleasure.

And here is the exact opposite opinion: Lucky Stiff is a comedic performance that does not pretend to any intelligence. It is for the beholder who wants to escape from the everyday hustle and bustle and want to see something funny. Not sugary family melodrama but a theatrical, where a little of everything mixed. Love, the heritage of millions, the corpse-prankster, exciting game in the casino, and the many obstacles that stand in the way of a supposedly rich heir. Despite all the difficulties, the main character was able to avoid them and to become truly happy. After all, few ordinary shoemakers were able to know about the enormous inheritance, to fight for its reception, to have fun along in Monte Carlo in full power!

The atmosphere of the 60-70-ies of the last century was conveyed perfectly, as evidenced by the heroes’ costumes and the whole atmosphere of the play. This is a cheerful, positive, and life-affirming piece. Don’t believe anyone who says about the primitiveness and superficiality of this show. Musicals as such make life brighter & richer, even may be comparable to the breath of fresh air.
Last Update:April, 21st 2016