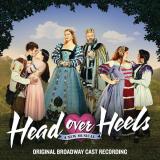 Gwyneth Paltrow is among the producers of this frothy new Broadway musical which pairs a 16th-century English pastoral with the music of The Go-Go's.
You have to give credit to the creators of Head Over Heels for thinking outside the box. One might have expected a musical inspired by the songs of The Go-Go's to be either a biography of the popular all-female '80s band or perhaps a modern story set in the sun-drenched environs of Southern California from where they hail. Instead, Head Over Heels bases its storyline on Philip Sidney's Arcadia. Because the first thing that comes to mind when you think of The Go-Go's is 16th-century English pastorals.

If you have trouble imagining songs like "Vacation" and "Cool Jerk" fitting into a scenario depicting a royal family's romantic complications, you still will after seeing this relentlessly frothy musical, for which the term "check your brain at the door" could have been invented. The farcical, gender-fluid shenanigans are as campy as things get on Broadway. And that's saying something.

The book — adapted by James Magruder from the original by Jeff Whitty (Avenue Q), who conceived the show — revolves around several star-crossed romances. The principal story involves Philoclea (Alexandra Socha), the youngest daughter of King Basilius (Jeremy Kushnier) and Queen Gynecia (Rachel York). Philoclea falls in love with Musidorus (Andrew Durand), a common shepherd, much to her father's displeasure.

Meanwhile, his oldest daughter Pamela (Bonnie Milligan) enters into an illicit relationship with her handmaiden (Taylor Iman Jones), whose father is the king's perpetually befuddled viceroy (Tom Alan Robbins). None of these entanglements comes as a surprise to Pythio, the Oracle of Delphi (played by RuPaul's Drag Race alum Peppermint, the first transgender woman to create a principal role on Broadway).

The resulting complications include cross-dressing and mistaken identities, but the convoluted storyline is little more than an excuse for a series of ribald sight gags and one-liners, many of them pertaining to issues of sexuality. At one point, a spirited debate takes place over Pythio's gender identity, with the oracle demanding to be described as a "non-binary plural" before eagerly agreeing to the suggested pronoun, "they." Meanwhile, Musidorus pretends to be an Amazon to get closer to his beloved, or, as he puts it, "Re-gender myself in a flowing wig and garments."

A little of this silliness goes a very, very long way, and you'll either find the humor uproarious fun or, like me, an utter trial. And while The Go-Go's repertoire includes several undeniably catchy songs such as "Our Lips Are Sealed, "Head Over Heels" and, of course, "We Got the Beat," which serves as the infectious opening number, many of the others seem like filler. Nor are they exactly seamlessly woven into the period setting, although the energetic "Cool Jerk" number provides the opportunity for Queen Gynecia to exult, "This caprine caper is good for the glutes!" (The score also includes the Belinda Carlisle solo hits "Mad About You" and "Heaven Is a Place on Earth.")

The performers certainly give the material their all. Veterans Kushnier and York are reliably solid; Socha and Durand are charming as the young lovers, with the latter displaying formidable comic chops; Milligan practically steals the show with her sardonic asides as the wisecracking Pamela; and Peppermint exudes amusing diva-style imperiousness.

Michael Mayer's blithe staging keeps things moving at a fast pace, with consistent fun from Spencer Liff's vogue-infused choreography. Julian Crouch's whimsical scenic designs and Arianne Phillips' handsome costumes are a pleasure to look at. The music sounds terrific, which is no surprise considering it's been orchestrated and arranged by Tom Kitt, the Pulitzer- and Tony-winning composer of Next to Normal, who collaborated memorably with Mayer on the Green Day musical American Idiot. That the score is performed by an all-female band feels obviously appropriate.

But despite the ample professionalism on display, the show comes across as painfully strained rather than pleasurably antic. Head Over Heels may be admirably woke when it comes to gender fluidity, but as entertainment, it's strictly retrograde.