Funny Thing Happened On The Way To The Forum, A synopsis 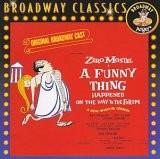 Funny Thing Happened On The Way To The Forum, A synopsis

Funny Thing Happened On The Way To The Forum, A Synopsis - Broadway musical

The plot revolves around a lazy slave named Pseudolus, yearning for his own freedom, and his young master Hero. Ancient Rome, three neighboring houses, one of which belongs to the Hero and his parents, Domina and Senex, the second – to Marcus Lycus, he is also the owner of a brothel, and the third – to an old crank Erronius, seeking for many years for his stolen children.

Madame Fate smiles to Pseudolus, and a young Hero opens to a servant once a secret: he is in love with the beautiful courtesan, young Philia that belongs to Lycus. A slave catches luck by the tail and offers his owner a deal: love of Philia in exchange for own freedom. So this dynamic and exciting history of love and fun begins.

Slave is sent to a brothel to convince Lycus to sell him the girl, but finds out that she has already has been bought by militant centurion Miles Gloriosus, to become his wife, and the transaction cannot be reverted. Quirky Pseudolus lying about that he sees plague’s symptoms on that girl, and offers to send her in isolation from the others, in the Senex and Domina’s house, which just went on a trip, because – what a luck! – he knows how to cure her. The owner of a brothel agrees and thus the servant wins alone with his master’s beloved a couple of days for him.

Cunning slave possesses quite a bit of time to figure out how to cancel a dubious marriage and to steal a freedom from a Fortune, but all his efforts are not in vain, even if it once seems that all the tricks and clever plans of slave have failed. After all, who would have thought that it was an old neighbor, who will be in the right place at the right time to recognize own child in a courtesan?
Last Update:April, 06th 2016