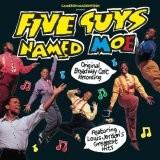 
BIG MOE:
I'm gonna tell you a story about Jack and Jill,
and I don't mean the couple that went up the hill,
I mean a couple of lovers that live next door,
they're always battlin'
and I'm just tryin' to keep score.

They keep a pettin' and pokin' and jabbin' and jokin'
and coolin' and crackin' and wooin' and whackin'
and neckin' and knockin' and and singin' and sockin'
squawkin' and squeezin' burnin' and freezin'.

EAT MOE:
He holds her hand for as long as he's able,
but when he let's go she bops him with the table.

EAT MOE:
A pattin' and a pinchin'
and clobberin' and clinchin'
they enjoying themselves, having a good time.

ALL:
Everybody had a time, they had a real good time,

ALL:
Everybody had a time, they had a real good time,

FOUR EYED MOE:
Now Reverand Green thought he'd call one day,
on those nice newly-weds across the way,
but just as the pastor knocked on the door,
a straight right connected him and he hit the floor.

ALL:
Everybody had a time, they had a real good time.

NO MOE:
Once a lion escaped from the ciruc train,
he strayed in Jack and kills domain,
just then they got in a towerin' rage,
the lion took one look and jumped back in his cage.

LITTLE MOE:
Well ma Momma said, I'll go right in there and fetch her,
bit lord Momma came out ridin' on a stretcher,
feintin' and foldin' hittin' and holdin',
they were in love, havin' a good time.