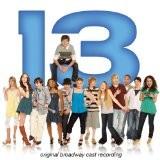 Evan Goldman lived with his family in New York. Teen was happy to experience the upcoming birthday. According to Jewish custom, in the 13 years the child becomes an adult – this event is celebrated with special ceremony named ‘Bar Mitzvah’. But the plans to hold a festive party suddenly collapsed after Evan's parents divorced. Together with his mother, a teenager moved to Appleton, which was in Indiana. Evan met with his new neighbor girl Patrice. The contemporary showed him all the fun that was in their town and around. Being worry because of lack of friends that would come to his Bar Mitzvah, Goldman decided to make friends with Brett Sampson – the most popular school student. He advised footballer Brett to invite the most beautiful girl to the movie, to be able to kiss her. Delighted Brett decided to call Kendra. Jealous friend of the future girlfriend said that she was busy and unlikely to come – Lucy herself wanted to be a football beloved. When Patrice found out about invitations to Bar Mitzvah, prepared for the most popular students of the school, she was upset. A girl was an outcast, so her presence at the party could spoil everything. At first, Evan rejected this assumption, but when he began to distribute invitations, he tore the piece of paper with the name of Patrice. Goldman realized that the neighbor was right – her appearance at the Bar Mitzvah could have meant no other guests.

Archie, Patrice's best friend, was upset of how Evan did. However, the teenager pledged to reconcile Goldman with the girl if he could arrange a meeting with him to Kendra. At first, Evan did not agree, but after threats of ailing Archie to appear at a party and to spoil everything, he gave up. In response, the teenager tried to persuade Patrice to reconcile with Goldman. Despite the fact that the girl was in love with a new neighbor, she has not forgiven him. Brett said at school – Evan’s mom should buy tickets for a horror movie, as due to the young age of students, tickets would not be sold to them. At first, Goldman refused, but after threats of a player to return the invitation to the party, he was forced to agree. Using Archie's disease, Evan managed to persuade his mother to buy tickets. Hoping for forgiveness, he also invited Patrice to the cinema. The evening was unsuccessful – neither Brett, nor Archie could kiss Kendra. Using that occasion, Lucy has become a girl of a football player.

Soon friends of Brett realized – now he had no time for them. Evan promised them to make the footballer thrown Lucy and to start dating with Kendra. Archie asked Patrice to help Goldman in this matter. Although a girl refused, he realized that a friend supports her neighbor. Reconciled, Evan and Patrice tried to divert attention of footballer from Lucy. Having learned that Kendra fights because of him with a friend, Brett decided to win back this girl. Abandoned Lucy rigged trap to Evan and his girlfriend, after which the footballer said that teenagers were dating. Believing in a lie, Brett lashed out at Goldman. When the student began to insult Archie and Patrice, Evan realized that in fact they were his best friends. Seeing the true nature of Brett, Kendra decided not to date a player. She drew attention to Archie, who always wanted to go with her on a date. Evan kissed Patrice, pleasantly surprising a young neighbor. Only real friends of Goldman were present at Bar Mitzvah, and the holiday was a success.
Last Update:August, 17th 2016