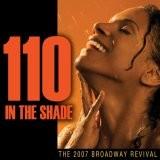 110 in the Shade Review - Broadway musical

The musical is loosely based on the play ‘The Rainmaker’, written by N. Richard Nash in 1954, and the film with Burt Lancaster and Katharine Hepburn. The spectacle refers to the shows, which at their time have not received significant recognition because of the appearance of more colorful performances in the same season. In the case of this musical, attention of audiences and critics was fully possessed by ‘Funny Girl’ and ‘Hello, Dolly’. Charming and old-fashioned story about Texas town residents could enter into the golden fund of musicals, if the production has got to the stage in a more appropriate time. The show is full of romantic songs that convey the mood of the lonely hearts and their craving for love. Broadway play featuring Inga Swenson received low critical acclaims, even though a great opera voice of a singer. Development of further versions of the play was more modest in comparison with the production of the original show. The number of musicians has been reduced, orchestration redone, there were numbers that did not exist in the original histrionics.

According to critics, these changes have benefited the performance. In his new version, sound was more lyrical and natural. Now the production completely immersed the audience in emotional experience of lonely provincial girl. The country style of songs sounded very realistic in strict vocal by Audra McDonald. Propensity of an actress to jazz and blues compositions helped her to portray emotional throwing of protagonist greatly. Critics pointed out that the version of 2007 was created exactly for this singer, whose talent was the brightest ornament of the entire show. They also appreciated the acting of 77-year-old John Cullum, involved in the role of Lizzie's father.

The least amount of box office for the weekend organizers received in mid of April 2007 – the first week of tryouts. It was $ 197,785. The maximum amount of box office was $ 410,515 in mid of July 2007. The appearance in the XXI century of several new improvements of a show revealed that the audience and the directors began to realize that the golden age of musicals included not only the famous pieces. Created at the same time spectacles have excellent performances of songs and fantastic storyline, like this one.
Last Update:August, 16th 2016