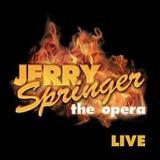 This musical did not hit the Broadway. Its opening was scheduled for 2004, but was soon canceled. Still, it was well known in London, where the histrionics not only officially was staged in the West End, but also on the National Theatre’s stage from April, 2003, giving 33 performances and in November 2003 in the Cambridge Theatre with exactly the same number of exhibitions. British Sky Broadcasting took staging on the West End in July 2004. The main role took the well-known David Soul, replacing the actor, who performed the role of Jerry in previous runs – M. Brandon. All in the same National Theatre, performances were up to the beginning of a tour in the UK, up to February, 2005. By September, seven months after the closure of the show in the West End, it has been announced that the show will go on tour in another 21 regions.

Among other US productions, it was played in Las Vegas at the MGM Grand Hotel and Casino. The musical also traveled to Australia, Canada and Ireland. Production has collected a lot of awards, as well as for Best Musical, not leaving unnoticed actors, performing main roles. As the best actor, David Bedella won several awards. He had the only role that did not require the execution of musical parties. Technically, the actor only spoke, being the narrator of this theatrical, perfectly coping with it.
Release date: 2004
Last Update:April, 19th 2016