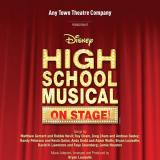 The show is an embodiment of the legendary movie by Disney productions on a scene. Due to the fame of the film, a decision to create a version of the musical on stage has been made. The tours of the show began in 2007 and ended in 2008. The theatrical version had great popularity. Actors were the following: J. Martin (Troy), A. Jacobs (Gabriella), S. Evans (Chad), C. Schawarz (Sharpay) and also S. Lacombe, B. List, O. Oguma, B. Thompson, R. Bohmer & E. Harvey. The book was written by D. Simpatico.

The first performance took place in Atlanta in 2007. The same year, the musical was shown in Wales. One more version was created in Canada in 2009. The director and choreographer was D. Conolly. There are also some famous unprofessional versions: one took place in the theater camp and the other – in dramatic school.
Release date: 2008
Last Update:October, 06th 2020