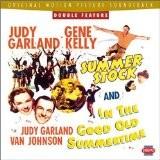 Initially, the producer J. Pasternak planned to invite to the main role M. Rooney, a constant companion on the stage of actress Judy Garland. But later the decision was reversed, and on the main role was approved G. Kelly. However, difficulties have arisen with the main female role too, when initially approved J. Garland didn’t do that well, suffering from drug addiction. For this reason, the making process stretched by as much as 8 months. In place of Judy Garland was predicted another actress, J. Allyson, after the first one was 3 months in the drug clinic, in parallel gaining weight. In general, the filming process was challenging both for the actress and for the whole team who worked on the histrionics. For example, “Get Happy” song could be written only when the actress dropped the extra 20 pounds, and it was 2 months later.

In the post of director was originally approved B. Berkeley, but before shooting the reins received C. Walters. The latter, like G. Kelly, agreed to take part in this musical only out of respect for Judy Garland, whose career required support. During filming, J. Pasternak has repeatedly discussed his participation with the management of the studio Metro-Goldwyn-Mayer. The reason was the lack of respect from the main actress to him in the process. She was often late for filming, or did not appear at all, but the management was adamant: Judy Garland gets a chance again and again. Metro-Goldwyn-Mayer studio was grateful to the actress that she influenced their success in the past very much, and the least they could do for her is to support and be there in not the best of her days. They feared that if the producer refuses to perform, it would negatively affect the state of Judy. After the shooting, she was fired, but a show with her participation was a box office success.
Release date: 1950
Last Update:July, 13th 2016