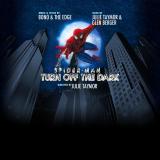 Spider-Man, Turn Off the Dark Lyrics

Songs for a show composed by the band U2 – Bono and The Edge. The scenario was developed by J. Taymor, G. Berger & R. Aguirre-Sacasa. Because of the complex technical equipment, pre-Broadway exhibition haven’t been carried out. The try-outs began in Foxwoods Theatre at the end of November 2010. The play entered in history as the theatrical that had the longest pre-show. In mid-April 2011, the try-out was stopped and musical has been finalized. At the beginning of May, the show once again went into preliminaries.