Year with Frog and Toad, A review 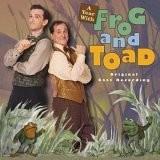 Year with Frog and Toad, A review

Year with Frog and Toad, A Review - Broadway musical

The musical is based on the stories for children ‘Frog and Toad’, written by Arnold Lobel in the 1970s. Theatrical was made by request of the author's daughter. She also developed the design of the show, focusing on her father's illustrations. Husband of Adrianne Lobel, actor M. Linn-Baker, helped to adapt the story for the libretto. Later, he played the role of a frog in a Broadway production. The show was groundbreaking, as it was the first show on Broadway of professional children's theater. The musical involved a minimum number of actors, allowing it to small troupes. Broadway show was three times nominated for Tony and once – at the Drama League. Minimum box office was received in the first week after the premiere and amounted to 86,273 dollars. The maximum amount – $ 256,493 – organizers have gained in the final weekend of the show.

Witty and hilarious musical was not just for young audiences – adult love good stories too. They found it a very interesting show. As planned by Adrianne Lobel, main characters were presented in the form of Edwardian gentlemen – the period of the reign of King Edward VII in 1901-1910 years. Elegant costumes bring images of forest dwellers closer to the world of people. Comicality of some characters was emphasized by the authors. Ironic lyrics did not give adult viewers to get bored. They could also track hints at other famous shows, existing on the stages. Songs, written by Robert Reale, were reminiscent of jazz motifs of 1920s. Stage design included the houses of the main characters, through the open walls of which the audience sees everything that happens inside. It also included the gigantic flowers and trees, highlighting the growth ratio of the characters.

Theatrical was highly appreciated not only by children, but also by their parents. The history of friendship between entities with different characters shows that, despite any shortcomings, it is necessary to appreciate the faithful companion, who comes to the rescue, taking care of you. Cheerful Frog and grumpy Toad happily spend their free time together. They are quite similar in a sincere spirit and emotions. The histrionics gives a good example to children, talking about the importance of empathetic relations. The value of friendship cannot be overstated – it will always been sought by real people, and the inhabitants of the fairy world. The musical brings not only entertainment, but also teaches, helping viewers to set priorities in life properly.
Last Update:August, 03rd 2016