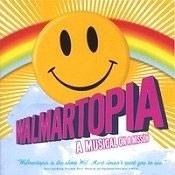 The idea to write a satirical musical came to spouses Andrew Rohn and Catherine Capellaro after numerous articles in the press about how Wal-Mart company violates the rights of its employees. In addition to this information, the creators used the autobiography of the founder of a network of hypermarkets Sam Walton, as well as books by Liza Featherstone and Barbara Ehrenreich. Married couple together with children was living in Madison, when they were asked to come up with political musical to the 10th anniversary of Mercury Players Theatre. Originally, the theatrical should be about confronting of large Overture Center, which opened in their city, and artists who have not received the support of this artistic center. Later Andrew and Catherine considered this topic too narrow and uninteresting for the spectators. So they shifted the action in the hypermarket’s network, which also had human rights violations.

Within a radius of 50 miles from the city of Madison were located 13 Wal-Mart stores. The couple had never worked there, but, thanks to a detailed story of L. Featherstone and B. Ehrenreich, they were able to show the whole inside story of these hypermarkets. Dystopia venomously sneered at the idea of global consumption, nurtured by this monster company. Despite the rather absurd plot, production presented to the public very funny songs and vibrant dances. Extended to two acts, production was shown at the New York stages, but not at the Broadway itself, unfortunately. In the musical, you can hear a variety of music: rumba, hymns, marches, ballads and pop motifs. Anna Jayne Marquardt received an award from the Fringe Festival as an outstanding actress. Staging has become a sensation in New York. The authors of the show hoped that their performance would help people think about how cheap goods for Wal-Mart were created. Also musical could attract the attention of buyers to the local producers, who were losing battle for customers to global corporation. Despite the deep meaning inherent in the staging, the show turned out very easy and fun. Good mood of the audience after watching the performance was the best indicator of the quality of ironical musical.
Last Update:July, 21st 2016