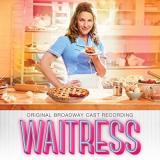 Waitress is a musical with music and lyrics by Sara Bareilles, and a book by Jessie Nelson. Based on the 2007 film of the same name, written by Adrienne Shelly, the musical tells the story of Jenna Hunterson, a waitress in an unhappy marriage to her husband Earl. When Jenna unexpectedly becomes pregnant she begins an affair with her gynecologist Dr. Jim Pomatter. Looking for ways out she sees a pie contest and its grand prize as her chance.
Last Update:August, 26th 2016