That's What Kids Do review 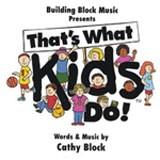 That's What Kids Do review

Songs composed by music graduate of Berkeley College, were recorded by bands ‘Kool & The Gang’, ‘The Manhattans’ & ‘New Edition’. Many artists – D. Ross, A. Jarreau – also included songs by C. Block in their repertoires. Her song sounded in the film ‘Do The Right Thing’. A gifted composer plays the flute, guitar & banjo. Once a woman has decided to start composing music for young listeners & their parents, as there were very few works that would make interest to both adults & children. Also, Cathy Block was affected by her own family situation – the composer has three daughters. Her first album was awarded with Editor's Choice by the ALA & TTP Platinum. In 1999, the composer has created a children's choir. Age of members ranged from 4.5 to 14 years. A year later, ‘The Living Green Children's Chorus’ performed a musical revue for the first time. The play was performed in several US states & abroad. Songs from the play belonged to different styles of music; their lyrics can be called humorous & poignant.

The idea of writing a musical about school time came to Cathy Block at a time when she saw the daughters’ interest to her stories about own childhood. After talking with many friends, she found out that people had similar memories about own early years. The musical received rave reviews from the public – many viewers themselves were in similar situations, of which told the participants of the choir. The show gradually became the first part of a trilogy, telling of life of students in elementary school & then they moved to the middle classes. As a music teacher, Cathy Block perfectly understood the difficulties of many kids who have adapted badly to the start of new classes & new environments. Questions raised in the songs are relevant to each of the young generation, coming into the school for the first time. Search for friendship, love & joy of life interests a person regardless of age. Therefore, the musical was highly appreciated not only by children but also by their parents. Revue is ideal for production in schools with own choirs.
Last Update:July, 18th 2016