Tell Me On A Sunday synopsis 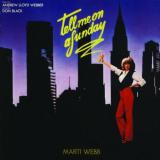 Tell Me On A Sunday synopsis

Tell Me On A Sunday Synopsis - Broadway musical

Young Englishwoman came to the New World to find love. When she began dating to American, a girl told him that she was not one of those women who aspire only to career or just sex. Relations between them were destroyed after the unpleasant truth was revealed – lover cheated Englishwoman with many girlfriends. Unable to bear the news of this, the girl left her boyfriend. Going to the streets of New York, she began to think about all her life. As a result, she was able to convince herself to start all over again. Another friend of a girl has become an English film producer Sheldon Bloom. He took her along with him in Los Angeles. At first, experiencing only happiness, she soon began to think about different things. Drawing attention to Californians, an Englishwoman understood that she did not want to become the same hypocritical and false as they were. Decided to meet with Sheldon, she called him to the studio. A girl was struck by the fact that she was not connected with the beloved. He put his work above relations with her. In spite of the comfortable life at the luxury villa, the young lady decided to leave the producer. She just had realized that Sheldon treated her as one of things of a wealthy life, just like the house, expensive things… Mistress from England only showed to others a guy’s financial position. Realizing this, the young lady left the Bloom and went back to New York.

Soon Englishwoman met the seller. They started dating, but once a girl found out that her lover was cheating on her. Ostensibly leaving in a business trip, boyfriend actually stayed in New York and spent time with other women. Realizing her mistake in the choice of a new love again, an Englishwoman left the seller too. Disappointed with romantic feelings, she vowed that would now date only to married men. After a while, she met Paul. In deciding to pursue her career, she has received a residence permit. The relationship with a married man was okay for Englishwoman, but once things did not go as planned. Paul was so much in love with a young lady that asked her to marry him, deciding to leave his wife. When she heard these words, she felt shock. Simply wanting to get away from loneliness, she did not want to break someone else's family, neither she wanted to seek to marriage vows. As a result, she said Paul that she didn’t have reciprocal feelings to him. She had to abandon the love relationships. She promised herself to become the same naive and respectable young lady, she was arriving in the USA. The heroine has decided to return to her former love ideal and to re-start searches for him.
Last Update:July, 18th 2016