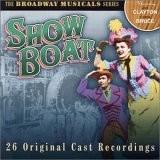 It is interesting, if amongst Oscar Hammerstein’s musicals are simple, with no hidden subtexts, not teaching and not raising important issues? Probably, not. It is for this reason the above-mentioned figure is considered a genius of theatrical art, and most of his brainchildren have already become classics. With regard to this theatrical, in addition to interesting story, it says of and examines the problem of racism in American society. Hammerstein devoted much time to study of this issue and eventually concluded as soberly thinking person that skin color should not be a barrier in human relations: not in a friendship, and even more – not in love. The theater person decided at every opportunity to point to the falsity of racial prejudice, and ultimately achieved in this area significant progress.

It is difficult to single out one of the strengths of this creation – they are all remarkable. Take, for example, acting game of N. Terris. Actress embodied the central character of the play – Magnolia. Initially she appears to the audience as weak and naive girl, unable to think straight in the love situation. But over the years the main character gets stronger, and thanks to own persistence, provides a future for herself and her daughter Kim. Mrs. Terris masterfully conveyed the transformation of the nature of Magnolia, for which she deserved the recognition of the fans and the highest evaluations from critics. Howard Marsh coped well with his work. His character is somewhat monotonous and revealed from a new side only in the last part of the second act. It is the personification of true repentance, which is so difficult for a lot of people.

Special mention should be given to scenery. They are made in clear river theme. It should be noted that the creators were not limited to artificial background behind the scenes. All elements, including the ship, were made of natural materials and elaborated to the smallest details. This histrionics one of the first resorted to the use of two- and even three-storey scenery. The costumes also gave realism and authenticity to all plot. Female characters were dressed in slightly extended attires, which at that time gradually went out of fashion. On the men were the original costumes of the late 19th century, characterized by the presence of heavily lowered jackets.

It is not surprising that over the years the project has become a classic theatrical art. It simply devoid of weaknesses: everything from acting to stage design is made at the highest level. In addition to this, production carries important social message, which consists of the fact that all people are equal and skin color is insignificant factor.
Last Update:July, 13th 2016